At the XXII National Radio and Television Trade Show held at Palazzo dello Sport in September 1956, Unda came out with its signature ‘hi-fidelity’ model 76/4, a luxurious 6 tube (ECC85-ECH81-EF85-EABC80-EL84-EM80) superhet, with solid state rectifier, designed to receive six AM and FM bands. This set was equipped with an eight-key switch, low/hi tune control, a four position tune control, and external source plug. It had four Hi-Fi 3D multi-directional loudspeakers with 5.5W output. All this was housed in a precious wood midget, cabinet, measuring 62X38X27 cm. The radio-phonograph 76/6 had the same characteristics as model 76/4, but was mounted in an elegant polished wood console, embellished with gold metal decorations. On top there was the 3-speed record player, and adjacent to the loudspeakers, along the sides, there were two cabinets to store record albums. Upon request, this model was available with an automatic record-changer.
At the end of 1957, the Company faced great financial problems stemming mostly from heavy investments in the television production sector, forcing it, as per request on April 3, 1958, by Walter Amonn, at the time President of the Board of Directors, to start receivership proceedings. On April 10 the receivership was made public through the Como Tribunal’s legal publications and through announcements in the local media, “La Provincia”, “Ordine” and in “Il Sole” of Milan. The receivership had been planned to last one year. The month before, in March, the Company’s stock had been drastically cut to Lit. 19,575,000 as a direct consequences of financial losses.
On August 7, 1958, after four months, a settlement with creditors had been reached. There were 273 creditors for a total of Lit. 425,912,987. Meanwhile, in order to avoid bankruptcy, negotiations were initiated for the sale of the logo to companies in the radio industry. At the end the two bidders were INFIN of Turin, a group of companies including Magnadyne, and CGE (Compagnia Generale di Elettricità) of Milan, who made the best offer of Lit. 50,000,000 for the logo and its patent no. 74878 registered on September 22, 1943 (a renewal of preceding patent no. 49149 registered on October 8, 1934), thus acquiring the rights to produce and sell in Italy and abroad Unda radio and television sets and similar products, including professional radio and television sets and high frequency measuring instruments. It also purchased the warehouse for Lit. 136,000,000. On its part, Unda had to desist from producing any kind of radio or television instruments and give up construction license no. 516 dated March 1955.
To evaluate the offer, an extraordinary meeting was called on August 13, 1958 during which it was decided to change the name Unda Radio S.p.A. into F.A.S.E. S.p.A. (Fabbrica Apparecchi Strumenti Elettrici), with intent to produce and sell electro-technical and mechanical instruments. Thus the CGE offer could be accepted and on September 9, 1958, the end of activities was duly registered by a legal authority in Milan.
The 198 employees, of which 152 factory workers, received the pink slip by registered mail. From that fateful day when Unda went into receivership, it limited its production strictly to complete and test the radio and television models in commerce. On December 10, 1958, the Tribunal in Como declared the settlement with creditors closed.
The factory stopped its production and the building was leased to Miralanza at the beginning of 1960. Other tenants followed and in 2000, under new ownership, the building was renovated. The long structure which had housed the assembly line was substituted by a courtyard and condominium, and in the office part of the building there is now the Istituto Tecnico Giovanni Pascoli.
Unda production continued in CGE’s factory in Milan and continued to be present at the National Radio and Television Trade Shows until 1962, year in which the name Unda disappeared completely. Th. Mohwinckel company remained the sales agent.
Under the new administration, radio and television sets continued to be produced.
Worthy of mention is the first transistor radio bearing the name Unda in the 1959-1960 season, the “Bel Ami” 61/1. It was a six transistor receiver equipped with a diode for SW only. During 1960-1962 other transistor models were built, such as the 61/2 “Haiti”, the 93/1 and 93/2 “Bahia”. In January 1961 a three-speed on four tracks portable tape-recorder was put into commerce. Television production also continued, but its models were not particularly noteworthy compared to those produced by the competition. 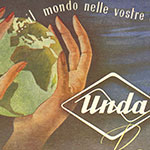 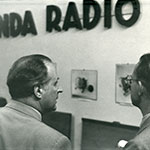 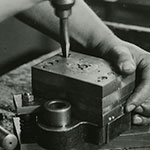 The automobile reaches maturity and its modern form: a single shell encompasses completely the object, enclosing and connecting all the necessary elements (engine, driver and passenger compartment, headlights, fenders, curved windshield). Only the bumpers remain separate, but will be incorporated twenty years later. The shape of the automobile, though simplified, will remain convex for many years, based on curved lines as the sheet metal pressing technique allowed. Max Miedinger designs the “Helvetica” a nineteenth century printing type which will become the symbol of design, especially related to Italian design.

During this decade one can find the traditional radios – with tubes – designed with essential lines, squared, angular, often with tuning keys, alongside the miniaturized transistor versions. These too, though fast and versatile, will face the competition of the new prodigious means of mass communication: the television.